The Case of the Persistent Executable

A malware infection, sysinternal’s process explorer and lots of amateurish hunting around!

I woke up last Saturday around 11:00 in the morning to find my room mate sitting at our shared computer typing some document in MSWord, he then minimized the document and proceeded to open the D: drive from My Computer. My usually fast Windows responded extremely slowly to the double click. I sat bolt upright in my bed and asked him to repeat the procedure with the other drives. The same delay was noticed on the other drives too. I then asked him to right click on any drive expecting a change in the context menu due to the presence of an autorun file. The menu was intact. I then got down and sat at the chair and used the attrib command at the prompt for each drive. This is what I got.

The contents of the autorun.inf showed me the name of the malicious executable

I then immediately fired Process Explorer to see if the process was running. Failing to find the process or a handle to it, I then used the attrib –s –h –r fppg1.exe to reset attributes and proceeded to delete it using del fppg1.exe. I repeated the same procedure with the autorun.inf file. Since I have 6 partitions on my hard drive, I wrote a bat file, named it clean.bat and saved it in %systemroot% with the following contents.

I then ran clean.bat from the console on each partition. Happy that my system was back to normal, I restarted explorer to remove the effects of the autorun.inf file on the default open option on the drives. I then proceeded to open F: drive using the double click through My Computer. I was surprised to see the delay occurring again. The attrib command confirmed my doubts. The two files were back. I decided to dump the strings from the fppg1.exe file to see if I could find any clues. I ran the strings utility and piped the output to a text file called fppg1.text.

The file contained loads of ASCII characters and just three APIs that I recognized. That didn’t help much. 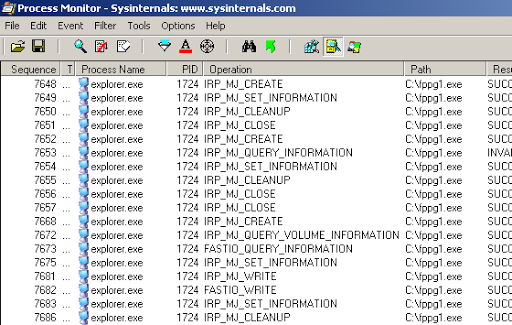 I then right clicked on Explorer to view its stack when IRP_MJ_CREATE Operation was performed. The stack had one unfamiliar entry. 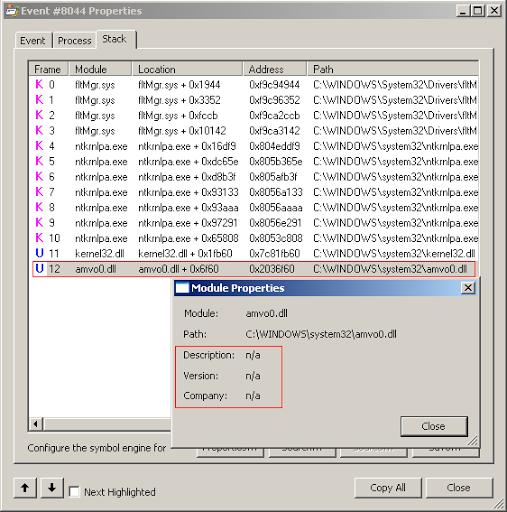 I used the find handle or dll feature of Process Explorer to search for amvo0.dll. The returned results didn’t raise my spirits. 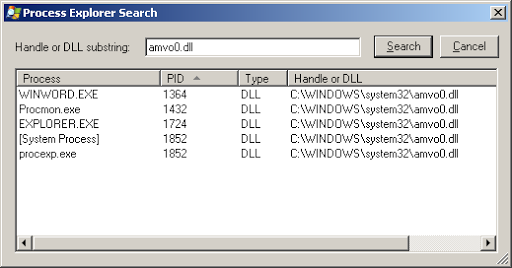 The dll had attached itself to other processes I had opened after restarting explorer. I then opened up cmd, changed to C:\Windows\System32\ and used the attrib command to confirm my suspicions about the attributes of amvo0.dll. I wasn’t disappointed.

I suspected that there could be an associated executable also present in the same directory and hence used attrib amv*. With my suspicions confirmed, I used strings.exe to dump strings from amvo.exe and did a file compare with fppg1.txt. Bingo! They were the same files in essence. The dll amvo0.dll was making explorer.exe and the system process to recreate the files fppg1.exe and autorun.inf whenever they were not found in the root of the drives. I used attrib again to remove the system and hidden attribute from amvo.exe and amvo0.dll and deleted amvo.exe through the command prompt. The file amvo0.dll was in memory and hence could not be deleted. One shortcoming of Process Explorer, I found would have really helped me, was to unload dlls which would have allowed me to delete the file immediately. I used autoruns.exe, another of Sysinternals creations, and found that amvo.exe created a registry entry in HKCU\Software\Microsoft\Windows\CurrentVersion\Run that caused it to be run at system startup. With the file gone, I restarted my system and then deleted amvo0.dll manually, fppg1.exe and the autorun.inf files using the bat file.

Case closed. I then went on to start my morning.